A downloadable game for Windows

Warning: contains inflation (by eating too much :P)

This is a combination of a shoot 'em up game and an eating simulator where you must battle to find the food , and eat the food to level up  in battle .

Give them food until they have full bellies :3  ( level and capacity increases with each eating session)

The key is to retreat when you can't win.

unzip and run the executable "SEF.exe" , make sure the data file "SEF.pck" is on the same folder

Fun game! This has a lot of potential to improve.

The shooter section is pretty decent, but could use more bullet
patterns/enemies. It's very simple at the moment, and Stage 2 feels like purely a test of how much HP you got before you arrived.
A few new enemies could help alleviate this. If you're feeling lazy, find some patterns from one of those danmaku games (e.g. Touhou) and put them in. They'd work fine.
Oh, and the difficulty's just fine too.

The stuffing content is alright, but having to watch the same progression over and over while doing the repetitive task of eating is tedious. It's good content, but accessing it isn't fun.

I really like the mechanic of controlling Yuri's arm and being able to throw items. I think this should be expanded upon.
When the mouse cursor is over the Back button, Yuri looks like she's stretching. It's pretty cute. Some kind of face change when the player hovers over the Back button to properly show that she's stretching would be a nice addition.
Leaning far forward at high fullness levels leads to Yuri's stomach appearing to phase through the chair below her. I think a neat (and appreciated) touch would be to have it squash against the chair, making it so she can't lean over as far. It would add to the physicality of the belly.
I know this is a stuffing game, but some weight gain seems appropriate. One doesn't eat constantly every day and spend most of their time in a cockpit and not gain a few pounds. A way to lose pounds and still stuff to high capacities could be a best-of-both-worlds situation, although that would mean creating a lot more art assets.

I agree with SChara, more stomach sizes would be nice

Could you make a working mac version for those who don't own a windows computer?

Cute game! Could use some work here and there, but it's not nearly as terrible as RedKnight made it seem(I owned the first boss, and was never trapped in the corner, maybe they're just not used to bullet hells? XD). All in all, enjoyable(at least, if you don't have astronomical expectations)! Still playing, just wishing they actually gained weight over time, not just increased belly capacity(though the bigger and bigger bellies are nice), and that we had the ability to change our primary eater(not always "controlling" Yuri(and I LOVE how we can make her faceplant a table full of food. XD )).

When I downloaded this, I expected a feeder game with an arcade shooter minigame to get food. Instead, I found a bullet hell that hinted at feeder aspects. The shooter "minigame" is extremely difficult right off the bat and the screen gets heavily cluttered quick. Enemies are big and annoying to move around, and the 'drop pods' constantly got in the way.

I was already on the verge of quitting when I decided to go once more. I made it to the boss and was immediately angry. The boss clustered me into the corner and I died right after blowing off the last leg.

2) Make a single hud for lives and food, rather than have them split up. It'll save screen space and make things more visible.

3) Make it so that if you do lose the level, you still get some kind of reward, maybe 1/3 what you would've gotten if you completed it.

4) Add difficulty settings. If someone wants to focus on feeding, they shouldn't have to play a bullet hell. Also, changing the amount of lives would make it more understandable if you lose, especially since most games like this have 3 lives standard.

5) Add a progress bar to the level. It'll make the player understand better what they need to do better to make it to the end.

Overall, the game feels totally unpolished and doesn't offer much to the feeder aspect, which was marketed as the main focus. I still think it's a neat idea, it just needs work and TLC. 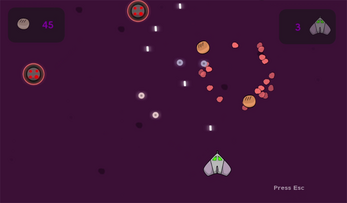 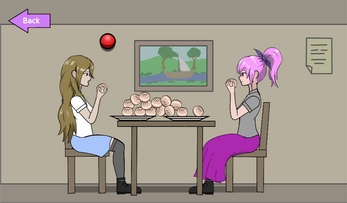 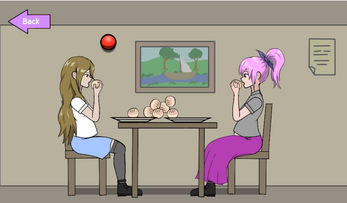